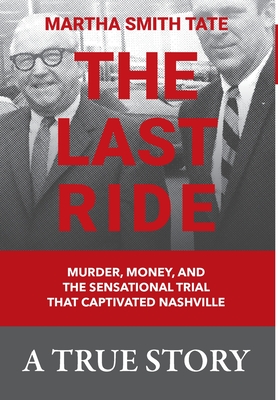 The Last Ride is the first book ever written about the murder of prominent Nashville citizen W. Haynie Gourley on May 24, 1968, and the heart-stopping, controversial trial that riveted the city of Nashville, Tennessee, and caused a sensation during the summer of 1969. Set primarily amid the racial turmoil following the assassination of Dr. Martin Luther King Jr. on April 4, 1968, the book traces the circumstances leading up to the killing of the popular, self-made millionaire Chevrolet dealer, the extensive manhunt and police investigation, and the improbable grand jury indictment of a popular former college football star. The work follows the life of Haynie Gourley, from before an unspeakable tragedy at age eight leads to a lonely, impoverished childhood in Cross Plains, Tennessee, to his 1915 arrival as a teenager in Nashville where he takes a job as an itinerant salesman of men's made-to-order suits, to his months in the trenches of France during WWI, to his prominence in the city's automobile industry, and his rise in the society of wealthy Belle Meade, becoming a member of the exclusive Belle Meade Country Club. The story is told against the backdrop of the founding and growth of Nashville, the nascent Civil Rights movement, the racial climate at Vanderbilt University during the still-segregated 1960s, along with the social history of the charmed Gourley family. The story centers around the events of the morning of May 24, 1968. Haynie Gourley, owner and founder of a successful automobile dealership, Capitol Chevrolet Company, agrees to go for a ride with his forty-year-old business partner. The two return to the dealership 15 minutes later. Haynie, 72, is dead of three gunshot wounds - one just below the left ear, a second to the neck, and a third to the chest. The shocking murder of a much-beloved citizen sets off a year of speculation: Where is the mysterious Black killer who vanished after jumping into the back seat of Haynie's car as he rode down Elm Hill Pike with his business partner? The murder occurred just as Haynie was about to realize his dream of having his only son take over and run his lucrative business. The timing of the murder is immediately suspicious, and the ownership of one of the most lucrative car dealerships in the South is in doubt. For the first time ever, the author pieces together the events and evidence that bring into question the outcome of this notorious case. The two families involved kept silent for 50 years, refusing pleas by journalists and authors hoping to write about the murder and trial. Haunted by memories of sitting through the nail-biting trial where Tennessee's legendary legal giants faced off in a tense courtroom drama, the author spent three years interviewing those involved who still survive and carefully studying the 2,400-page transcript and delving into countless news stories about the crime. This was Nashville's most publicized trial ever, covered obsessively by local broadcast TV stations and the two daily newspapers, the Nashville Banner and The Tennessean. Both papers printed the entire transcript of the trial as it happened. Even today, the story still fascinates. After reading this true-crime story, one is left to wonder whether or not justice was served in the end.