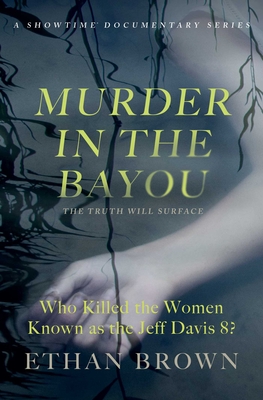 Murder in the Bayou is a New York Times bestselling chronicle of a high-stakes investigation into the murders of eight women in a troubled Southern parish that is “part murder case, part corruption exposé, and part Louisiana noir” (New York magazine).

Between 2005 and 2009, the bodies of eight women were discovered in Jennings, Louisiana, a bayou town of 10,000 in the Jefferson Davis parish. The women came to be known as the Jeff Davis 8, and local law enforcement officials were quick to pursue a serial killer theory, stirring a wave of panic across Jennings’ class-divided neighborhoods. The Jeff Davis 8 had been among society’s most vulnerable—impoverished, abused, and mired with mental illness. They engaged in sex work as a means of survival. And their underworld activity frequently occurred at a decrepit motel called the Boudreaux Inn.

As the cases went unsolved, the community began to look inward. Rumors of police corruption and evidence tampering, of collusion between street and shield, cast the serial killer theory into doubt. But what was really going on in the humid rooms of the Boudreaux Inn? Why were crimes going unsolved and police officers being indicted? What had the eight women known? And could anything be done do stop the bloodshed?

Mixing muckraking research and immersive journalism over the course of a five-year investigation, Ethan Brown reviewed thousands of pages of previously unseen homicide files to posit what happened during each woman’s final hours delivering a true crime tale that is “mesmerizing” (Rolling Stone) and “explosive” (Huffington Post). “Brown is a man on a mission...he gives the victims more respectful attention than they probably got in real life” (The New York Times). “A must-read for true-crime fans” (Publishers Weekly, starred review), with a new afterword, Murder in the Bayou is the story of an American town buckling under the dark forces of poverty, race, and class division—and a lightning rod for justice for the daughters it lost.

Ethan Brown is an investigative journalist, private investigator, and author of four previous books, Murder in the Bayou, Queens Reigns Supreme, Snitch, and Shake the Devil Off, which was named one of the Best Books of 2009 by The Washington Post. He has written for New York magazine, The New York Observer, Wired, Vibe, The Independent, GQ, Mother Jones, The Guardian, Rolling Stone, Entertainment Weekly, Details, and The Village Voice. He has appeared on NPR, WNYC, Court TV, MSNBC, Hot 97, and BET to discuss drug policy, street crime, the music business, life in Louisiana, and other issues. He lives in New Orleans.