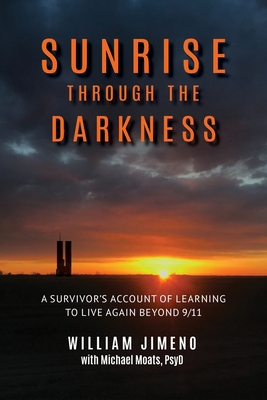 On September 11th, 2001, Port Authority Police Officer, William Jimeno, left his home unsuspecting of what the day was about to hold. Just a few hours later he lay crushed beneath the Twin Towers' 220 stories of concrete, steel, and glass. Most of his team had already died. He and his sergeant were helplessly trapped. The pain and anguish had only begun.

Many have seen Oliver Stone's World Trade Center, which depicted this horrific day and the rescue of Will and his Sergeant, John McLoughlin. Surviving the initial collapse was only part of the story. Multiple surgeries, forced retirement, survivor's guilt, depression, and learning to live again with PTSD were waiting outside of the rubble.

Will has teamed with clinical psychologist, Michael Moats, to share his message of faith, hope, and love and how these three things helped him navigate the unchartered waters of learning to live again after the tragedy of September 11th. Although Sunrise Through the Darkness speaks directly to first responders, Will's message is relatable to anyone who has suffered trauma or loves someone who has. Sunrise Through the Darkness marks the 20 year anniversary of 9/11 and gives honor to those that died through Will's continued work of healing and serving others.