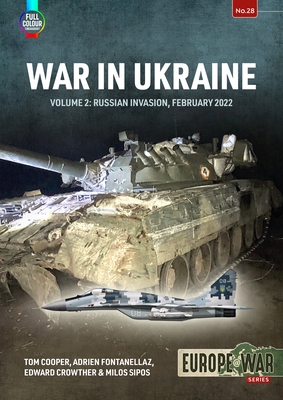 On 24 February 2022, President of the Russian Federation Vladimir Putin ordered a full-scale invasion of neighboring Ukraine. Taking place after the Russian invasion of eastern Ukraine and illegal annexation of Crimea of 2014-2015, and eight years of low-scale warfare in Donbas, as well as countless incidents on the ground and the sea, cyberwarfare, and political tensions, the onslaught was expected - both by multiple Western and multiple Russian intelligence services - to quickly topple the democratically elected government in Kyiv, and overrun and disarm the Ukrainian armed forces with help of collaborationists in a matter of between 3 and 14 days.

Early on 24 February, Armed Forces of the Russian Federation (VSRF) launched a series of missile and artillery strikes on main air bases and dozens of military facilities in Ukraine. Immediately afterwards, VSRF launched ground invasion, with its forces advancing on (clockwise) Kyiv, Chernihiv, Kharkiv, Mariupol, Melitopol, and Kherson. Although following a build-up that began already in April 2021, and expected by many, the onslaught still came as a major surprise - for the Ukrainian government, for Ukrainian armed forces, for its allies in the West, but also for the mass of officers and other ranks of the VSRF. Moreover, the deeper the Russians rolled into Ukraine, the more resistance they have encountered: while some Russian units performed as expected, entire armies began falling apart while ordered to advance at maximum possible speed - and that without the necessary fire and logistic support. After suffering catastrophic losses while failing to reach the downtown Kyiv, and failing to reach and enter Chernihiv and Kharkiv, the war in northern and north-eastern Ukraine quickly settled down into a bloody stalemate. However, in the south, the Russians initially advanced at amazing rate, taking Melitopol already during the first day of their invasion, and Kherson only few days later. Indeed, it was only once President Putin attempted to accelerate the rate of advance through heliborne operations deeper into Ukraine, that the VSRF suffered a severe blow in the fighting for Voznesensk and Mykolaiv, and its advance in this part of the country came to an end.

Richly illustrated, providing a detailed study of the involved armed forces, and the fighting in northern and southern Ukraine during the first two weeks of the Russian invasion in February 2022, War in Ukraine, Volume 2 is the first concise military history of this drama.