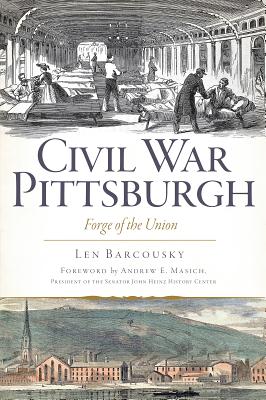 On Christmas Day 1860, the "Daily Pittsburgh Gazette "announced that more than one hundred cannons from the nearby U.S. Arsenal were to be shipped south. Fiercely loyal to the Union, Pittsburghers halted the movement of the artillery, which would have been seized by secessionist sympathizers. Over the course of the Civil War, Pittsburgh and Allegheny County provided both troops and equipment--including heavy artillery--in disproportionately large numbers. While no major battles were fought nearby, local soldiers and civilians sacrificed and suffered--the Allegheny Arsenal explosion in September 1862 left seventy-eight dead and was the worst civilian disaster of the war. Thousands dug trenches and joined militia companies to defend their city as others worked to support the wounded soldiers. Reporter Len Barcousky draws on the next-day reporting of the predecessors of the "Pittsburgh Post-Gazette "to craft a gripping and insightful view of the Steel City during the Civil War.