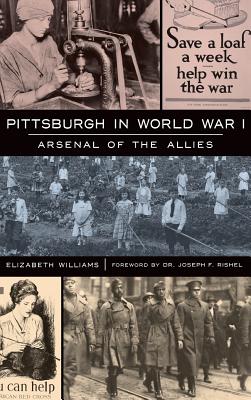 When the whole of Europe went to war in 1914, Pittsburgh watched the storm clouds gather at home. Yet Pittsburgh was a city of immigrants--the large Polish community urged leaders to join the side of the Allies, while German immigrants supported the Central powers. By the time the country entered World War I in 1917, Pittsburghers threw their support into the war effort united as Americans. With over 250 mills and factories, the Steel City and Allegheny County produced half of the steel and much of the munitions used by the Allies. Pittsburgh gave more than steel--sixty thousand men went to war, and women flocked to the front lines as nurses. One of the first gas masks on the western front was developed at the Mellon Institute, while the city's large Red Cross provided tireless support on the homefront. Historian Elizabeth Williams traces the remarkable story of Pittsburgh during the Great War.