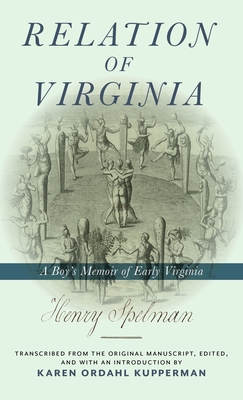 A memoir of one of America's first adventurers, a young boy who acted as a link between the Jamestown colonists and the Patawomecks and Powhatans.

"Being in displeasure of my friends, and desirous to see other countries, after three months sail we come with prosperous
winds in sight of Virginia." So begins the fascinating tale of Henry Spelman, a 14 year-old boy sent to Virginia in 1609. One of Jamestown's early arrivals, Spelman soon became an integral player, and sometimes a pawn, in the power struggle between the Chesapeake Algonquians and the English settlers. Shortly after he arrived in the Chesapeake, Henry accompanied another English boy, Thomas Savage, to Powhatan's capital and after a few months went to live with the Patawomeck chief Iopassus on the Potomac. Spelman learned Chesapeake Algonquian languages and customs, acted as an interpreter, and knew a host of colonial America's most well-known figures, from Pocahontas to Powhatan to Captain John Smith. This remarkable manuscript tells Henry's story in his own words, and it is the only description of Chesapeake Algonquian culture written with an insider's knowledge. Spelman's account is lively and insightful, rich in cultural and historical detail. A valuable and unique primary document, this book illuminates the beginnings of English America and tells us much about how the Chesapeake Algonquians viewed the English invaders. It provides the first transcription from the original manuscript since 1872.