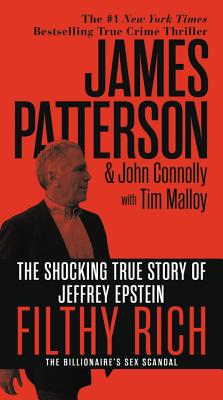 This is book number 2 in the James Patterson True Crime series.

Now a #1 Netflix documentary series. Get the full shocking story about billionaire pedophile Jeffrey Epstein in this #1 New York Times bestselling and definitive book.
Jeffrey Epstein rose from humble origins into the New York City and Palm Beach elite. A college dropout with an instinct for numbers -- and for people -- Epstein amassed his wealth through a combination of access and skill. But even after he had it all, Epstein wanted more. That unceasing desire -- and especially a taste for underage girls --resulted in sexual-abuse charges, to which he pleaded guilty and received a shockingly lenient sentence.
Included here are police interviews with girls who have alleged sexual abuse by Epstein, details of the investigation against him, and a new introduction with up-to-the-minute developments on the case, including Epstein's death by suicide.
An explosive true story from the world's most popular thriller writer, FILTHY RICH is a riveting tale of wealth, power, and the easy price of justice for America's wealthiest citizens.

James Patterson received the Literarian Award for Outstanding Service to the American Literary Community at the 2015 National Book Awards. He holds the Guinness World Record for the most #1 New York Times bestsellers, and his books have sold more than 325 million copies worldwide. He has donated more than one million books to students and soldiers and funds over four hundred Teacher Education Scholarships at twenty-four colleges and universities. He has also donated millions to independent bookstores and school libraries.

"Behind all the noise and the numbers, we shouldn't forget that no one gets this big without amazing natural storytelling talent--which is what James Patterson has, in spades."—Lee Child

Patterson's books might as well come with movie
tickets as a bonus feature.—New York Times

Patterson is in a class by himself.— Vanity Fair

The man who can't miss.—TIME magazine

James Patterson isthe gold standard by which all others are judged.—Steve Berry

Patterson has mastered the
art of writing page-turning bestsellers.—Chicago Sun-Times

"It's no mystery why James Patterson is the world's most popular thriller writer: his uncanny skill in creating living, breathing characters we truly feel for and seamless, lightning-fast plots. I do this for a living, and he still manages to keep me guessing from the first to last page. Simply put: Nobody does it better."—Jeffrey Deaver