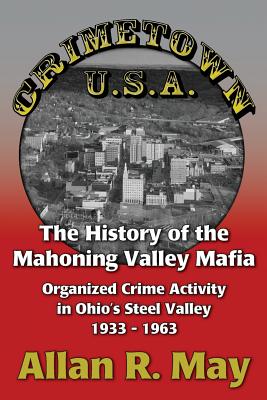 "Crimetown, U.S.A." is a narrative of organized crime in Youngstown, Ohio and the surrounding Mahoning Valley during the years 1933 to 1963. It begins with the Valley's participation in the Midwest Crime Wave of 1933-34, describing the demise of the legendary bank robber "Pretty Boy" Floyd. This is followed by the demise of one of the Valley's own in the brutal slaying of "Happy" Marino, which also happens to be one of the Valley's few gangland murders in which all the participants were tried, convicted and sent to prison. The mid-to-late 1930s is chronicled showing the dominance of the ethnic-based lottery houses, which operated in Youngstown. These operations came to end after a run-away grand jury created enough interest to draw the governor's attention. The late 1940s saw the height of popularity of the infamous Jungle Inn gambling den, located just over the Mahoning County line in Trumbull County. The history of this establishment is chronicled in "Welcome to the Jungle Inn," also by Allan R. May, and is a companion book to "Crimetown U.S.A." describing the history of organized crime in Warren and Trumbull County, Ohio. By the end of the 1940s the citizens of Youngstown put a new mayor in City Hall. Charles Henderson ran on the platform of "Smash Racket Rule" in the city. The man he brought in to do the "smashing" was Edward J. Allen. The feisty and fearless police chief began by chasing out two-thirds of the Valley's "Big 3," including Mafia member Joe DiCarlo, who muscled into the race wire service and controlled the local bookmaking. This period was followed by what was known as the "bug" craze, which was the Valley's nickname for the numbers game or policy, as it was also known. The battle for dominance resulted in a bombing war throughout the 1950s for supremacy in this field by the city's top policy racketeers, Sandy Naples and Vince DeNiro. By the end of the 1950s, Youngstown had become known as "Bomb Town." In the early 1960s, the bombs that were used to scare the competition were now being used to eliminate it. A wave of vicious killings took place, some taking the lives of innocent people. No murder was more notorious than the November 1962 car-bombing that took the lives of "Cadillac Charlie" Cavallaro and his 11-year old son. The senseless killing shocked the country and brought national attention to Youngstown. It also brought the city an everlasting and despised nickname, "Crimetown, U.S.A.

Allan R. May is an organized crime historian from Cleveland, Ohio. May began his writing career with a brief stint working for the Dean of organized crime writers, Jerry Capeci, at his popular "Gangland News" website. May moved on to write for Rick Porello's AmericanMafia.com, Court TV's "CrimeLibrary" and CrimeMagazine.com. May was a key contributor to the Mob Museum in Las Vegas. He has taught classes on the history of organized crime at Cuyahoga Community College's Senior Adult Education Program and gives lectures throughout northeastern Ohio. May is the historian at Lake View Cemetery and is on its Speaker's Bureau.