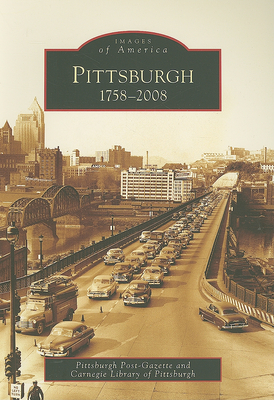 By Pittsburgh Post-Gazette, Carnegie Library of Pittsburgh
List Price: $23.99
Our Price: $19.19
(Save: $4.80 20%)
In Stock! Click on book for store specific on hands. (Store Pricing Varies From Online Prices)

Pittsburgh: 1758-2008 surveys the city's evolution from strategic fort in the wilderness to bustling industrial workshop to high-tech center for universities and health care.

A boatbuilding center and gateway to the West at the beginning of the 19th century, Pittsburgh later produced iron and steel used to construct bridges and buildings around the country and provided the cannons, shot, and ships that helped win wars around the world. In the process, Pittsburgh became a magnet for successive waves of immigrants - workers and entrepreneurs who shaped the culture and character of the city with their customs, churches, clubs, food, and an impressive collection of museums. With a roster of notable historical figures and as the birthplace of a slew of world-changing innovations, Pittsburgh is a city that left its mark on the history books.