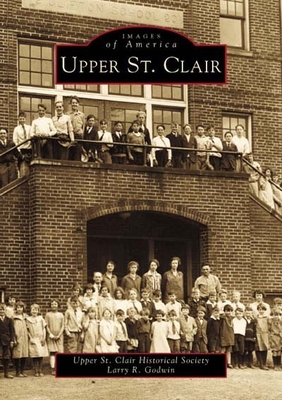 Before Upper St. Clair was a suburban community of fashionable homes and manicured lawns, the township consisted of fertile farmlands dotted by the bustling villages of Beadling, Bridgeville, Clifton, and Boyce Station. Even earlier, it was part of the larger St. Clair Township, founded in 1788, and was bounded on the north by the Monongahela River, on the east by Streets Run, on the south by Washington County, and on the west by Chartiers Creek. Named for American Revolution hero Major General Arthur St. Clair, this huge township was divided into Lower St. Clair and Upper St. Clair in 1806.

Upper St. Clair is a visit to the places of work, play, worship, and learning that have shaped daily life in this township in southern Allegheny County. It includes rare old images of coal miners in Beadling, merchants in Bridgeville, vacationers at Paris Lake, and a steam engine at Boyce Station. The Pittsburgh-Washington interurban streetcar arrives on the pages of Upper St. Clair, which also include a visit to the remains of Fort Couch, the site of the 1794 Whiskey Rebellion. Many residents may find themselves in class photographs from the Upper St. Clair schools, including Clifton, McMillan, Lesnett, Bridgeville, Caldwell, and Cook. Though the schools are long gone, their immeasurable influence is still felt.