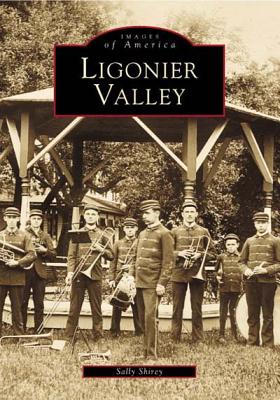 Nestled in the hills of western Pennsylvania, the Ligonier Valley has always had an air of mystery about it. The small towns and rolling countryside bear little witness to all that has occurred here. A fort was built but decayed and disappeared before being reconstructed recently. Many people have made significant contributions to the town and beyond, although time has lost many of their stories. The valley became an early industrial center with the growth of lumbering, mining, and iron production until the best resources were spent and these industries dwindled. Using hundreds of rare photographs, author Sally Shirey tells the story of this beautiful, historic area. In Ligonier Valley, readers can see the valley as it stood many years ago. After making the steep descent of Laurel Mountain, many pioneers were content to stay and build their lives in the valley. In 1758, the army of Gen. John Forbes erected Fort Ligonier. John Ramsey laid out the town of Ligonier around a public square called the Diamond. The influx of people, thanks to the Ligonier Valley Rail Road, gave rise to the hospitality industry in the valley. The Hotel Breniser, Ligonier Springs Hotel, and Kissell Springs Hotel were among those that served tourists and residents alike. Idlewild Park, dating from the 1870s, remains one of America's most beautiful amusement parks today. Reconstructed Fort Ligonier has been named to the National Register of Historic Places.