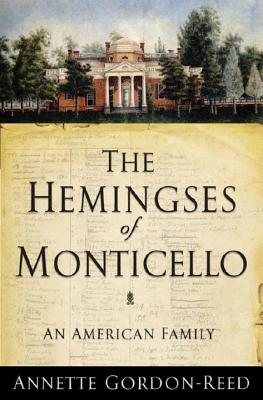 Winner of the National Book Award and the Pulitzer Prize: “[A] commanding and important book.”—Jill Lepore, The New Yorker

In the mid-1700s the English captain of a trading ship that made runs between England and the Virginia colony fathered a child by an enslaved woman living near Williamsburg. The woman, whose name is unknown and who is believed to have been born in Africa, was owned by the Eppeses, a prominent Virginia family. The captain, whose surname was Hemings, and the woman had a daughter. They named her Elizabeth.

So begins this epic work—named a best book of the year by the Washington Post, Time, the Los Angeles Times, Amazon.com, the San Francisco Chronicle, and a notable book by the New York Times—Annette Gordon-Reed’s “riveting history” of the Hemings family, whose story comes to vivid life in this brilliantly researched and deeply moving work. Gordon-Reed, author of the highly acclaimed historiography Thomas Jefferson and Sally Hemings: An American Controversy, unearths startling new information about the Hemingses, Jefferson, and his white family. Although the book presents the most detailed and richly drawn portrait ever written of Sarah Hemings, better known by her nickname Sally, who bore seven children by Jefferson over the course of their thirty-eight-year liaison, The Hemingses of Monticello tells more than the story of her life with Jefferson and their children. The Hemingses as a whole take their rightful place in the narrative of the family’s extraordinary engagement with one of history’s most important figures.

Not only do we meet Elizabeth Hemings—the family matriarch and mother to twelve children, six by John Wayles, a poor English immigrant who rose to great wealth in the Virginia colony—but we follow the Hemings family as they become the property of Jefferson through his marriage to Martha Wayles. The Hemings-Wayles children, siblings to Martha, played pivotal roles in the life at Jefferson’s estate.

We follow the Hemingses to Paris, where James Hemings trained as a chef in one of the most prestigious kitchens in France and where Sally arrived as a fourteen-year-old chaperone for Jefferson’s daughter Polly; to Philadelphia, where James Hemings acted as the major domo to the newly appointed secretary of state; to Charlottesville, where Mary Hemings lived with her partner, a prosperous white merchant who left her and their children a home and property; to Richmond, where Robert Hemings engineered a plan for his freedom; and finally to Monticello, that iconic home on the mountain, from where most of Jefferson’s slaves, many of them Hemings family members, were sold at auction six months after his death in 1826.

As The Hemingses of Monticello makes vividly clear, Monticello can no longer be known only as the home of a remarkable American leader, the author of the Declaration of Independence; nor can the story of the Hemingses, whose close blood ties to our third president have been expunged from history until very recently, be left out of the telling of America’s story. With its empathetic and insightful consideration of human beings acting in almost unimaginably difficult and complicated family circumstances, The Hemingses of Monticello is history as great literature. It is a remarkable achievement.

Annette Gordon-Reed is the Carl M. Loeb University Professor at Harvard University. The author of Pulitzer Prize–winning The Hemingses of Monticello, she lives in New York and Cambridge.

As the title suggests, The Hemingses of Monticello: An American Family brings an entire family out of the historic shadows that have been cast across Jefferson’s famous Virginia home. The book succeeds on this score by showing how generations of Hemingses labored at Monticello. It offers a stunning illustration of the tragedy that slavery could wreak.

The Hemingses of Monticello explores a thorny but important chapter in American history with distinction and clarity, offering a poignant, if also often ugly, chronicle of slavery, secrecy and family tension.

The Hemingses of Monticello by Annette Gordon-Reed, a historian and law professor, is a doorstop corrective to early American history, painting a composite portrait of a family that stood at the wellspring of the Jefferson, slave Sally Hemings, their children and kin fascinate and surprise.

An epic saga of the Hemings family, whose bloodline has been mixed with that of Thomas Jefferson since our third president took slave Sally Hemings as a mistress.
— Dallas Morning News

Because of Gordon-Reed, Hemings and her ancestors and descendants achieve full personhood. For that, the author deserves praise and lots of readers.
— Minneapolis Star-Tribune

[M]arks the author as one of the most astute, insightful, and forthright historians of this generation.
— Edmund S. Morgan and Marie Morgan - New York Review of Books

The Hemingses of Monticello may stir old passions by taking everything that is documented and then pushing the tale further. meditation on the fluid and conditional nature of something many Americans have regarded as fixed: our individual racial heritage.Were the children of Jefferson and Hemings white or black? Both? Neither? In antebellum Virginia, the answers to those questions meant freedom or bondage. In our country, will there ever come a day when those answers mean nothing?

The Hemingses of Monticello makes a powerful argument for the historical significance of the Hemings family not only for its engagement with a principal architect of the early Republic, but also for the ways the family embodies the complexities and contradictions of slavery in the United States.

In her new book Gordon-Reed has not abandoned her incisive legal approach to evidence, but here she has essentially become a historian, and a superb one. She has set out to do what she thinks professional historians should have been doing all along. With great historical imagination, she has done far more than put together a convincing case for the Jefferson-Hemings relationship. She has also reconstructed the complicated and intimate relations between black and white families in And perhaps most important, she has uncovered the many expressions of humanity by both blacks and whites existing within a fundamentally inhumane institution.
— Gordon S. Wood - The New Republic