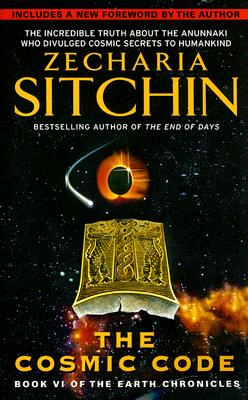 This is book number 6 in the Earth Chronicles series.

A classic of ancient human history—and one of the inspirations behind the History Channel’s Ancient Aliens—Zecharia Sitchin’s Earth Chronicles series is the revelatory and deeply provocative masterwork that forever altered humankind’s view of our history and our destiny.

Many thousands of years ago, a group of extraterrestrials from another planet guided the evolution of life on Earth—determining the existence and nature of humankind as we know it today. How did the master builders from the stars construct the miracle called man? Is the DNA that is at the core of all life in the universe a "cosmic code" that links Earth to heaven and man to God?

In this sixth volume of The Earth Chronicles, Zecharia Sitchin unveils writings from the past to decipher prophesies, and reveals how the DNA-matched Hebrew alphabet and the numerical values of its letters serve as a code that bares the secrets of mortal man’s fate and mankind’s celestial destiny.

Zecharia Sitchin is an internationally acclaimed author and researcher whose books offer evidence that we are not alone in our own solar system. One of a handful of scholars able to read the Sumerian cuneiform tablets, he has combined archaeology, ancient texts, and the Bible with the latest scientific discoveries to retell the history and prehistory of mankind and planet Earth. His trailblazing books have been translated into more than twenty languages; his first one, an oft-quoted classic, celebrates the thirtieth anniversary of its publication. A graduate of the University of London and a journalist and editor in Israel for many years, he now lives and writes in New York.

“Readers interested in the Kabbalah and in numbers mysticism will find Sitchin provocative.” — UFO Magazine

“In terms of scholarship and research, his books are light years away from those other popular authors.” — New York Tribune